Also known as: Quirky traits of the Scandinavian people.

We asked on Facebook and Twitter for your help on this. Thanks to everybody who came up with some awesome suggestions:

The slicing of cheese

It’s a thing. A big thing (especially in Sweden). Do not cut the end of the cheese if it’s a triangle, always use a cheese slicer (never a knife, sacré bleu!) – and if you make a ski-slope (i.e cutting too much of one side without correcting it) you risk being outlawed.

What, you didn’t think there were rules for this? Of course there are rules. This is Scandinavia. The metal cheese slicer is for harder cheeses, such as Cheddar and Västerbotten. The plastic slicer is for cheese that are slightly softer, like Havarti (aka Åseda Gräddost), Herrgårdsost, Grevé – and some brown cheeses, too. And the cheese slicer with a wire on is for Danish cheeses such as Riberhus and Gamle Ole.

Look, we know its sounds complicated, but if you use the wrong one, your cheese will be cut wrong. See ‘The slicing of cheese’.

Speaking as you breathe in

Sometimes we say things while breathing in. Like ‘ja’. Try it, you will find it most peculiar.  A point to note, however, is that it is usually done when you agree on something – affirming the point by breathing in and saying ’ja’ at the same time. The further North, the less sound is needed More here

Friday night is for tacos.

Nobody is sure when it happened, but we only eat tacos on Fridays. Don’t ask, just do.

Sweets are for Saturdays

It’s called Saturday Sweets. It’s also a thing. If you have them on Friday, then only in the evening and they its called CozyFriday. But on Saturdays, it’s Lørdagsslik or Lördagsgodis.

Our obsession with coffee breaks

You will find very few Scandi work places that don’t have the fika/kaffepause at 11am and again in the afternoon (before we leave work at 16.30, because that’s also a thing – and nobody stays late). Usually with some sort of cake. The only acceptable drink is super-strength filter coffee – so strong that it hurts your nostrils and makes all the caffeine receptors in your brain think you’re back clubbing in a field in 1993.

We don’t count months, we count weeks. Nobody else does, which makes for interesting conversations. First week of January is week 1 – and so it goes. Forget months and days, it is all about weeks in Scandinavia. Easter is in week 14 this year. Now you know. We have no idea when that is, either.

It’s most certainly a thing. Toast, cheese and jam. Any kind. Even marmalade. Just embrace it. Cheddar and Strawberry jam is a thing.

Most Nordic people embrace salty liquorice. The stronger and saltier, the better. We just do not understand that you don’t like it. How can you not? It’s strong, makes your mouth feel like its on fire and gives you a tummy ache when you over do it. We start training our children when they are young so we are sure they develop a taste for it. For Scandi ex-pats, it’s a rite of passage to make sure their overseas-born children develop the taste too (we see them at the cafe, tempting little Ingrid with salty liquorice lollipops).

The top ones are Tyrkisk Peber, Djungelvrål, and chocolate with salty liquorice centres.

Eurovision is huge. Huge. Especially in Sweden, where they have six regional heats just to find a representative winner. Even those who say they never watch it probably still do in secret. Eating tacos and Saturday sweets. 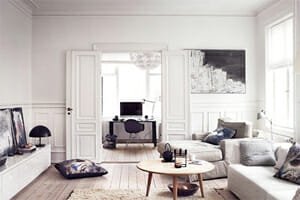 The first time you walk into a Danish apartment, you will think the owner is an interior decorator. Second time, you wonder if the owner of the first and second flat know each other. Third time, you realise every single apartment looks the same. White walls, white doors, Arne Jacobsen dining chairs, an Eames chair in the corner with a casually thrown sheepskin, Eva Solo or Blue Flute crockery.  We all have the same cutlery and, curiously, we seem to leave the stickers on them.

In Sweden, it’s the same except it’s a lot more IKEA mixed with stuff from our country cottages by the lake.

We really do eat a lot of meatballs

But the Swedish ones are not the same as the Danish ones, and the Norwegian ones are different too. Don’t confuse things. Learn the difference or get found out.

We have rules for the Smörgåsbord

There is a strict set of rules about when you eat herring and what bread you use for prawns and salmon. And at what point you start singing and cheering with aquavit. Eat open sandwiches with your hands and be forever excluded. No, we don’t write down the rules: You just need to know them.

Look me in the eye…

When you cheer with Scandi folk, it is very impolite not to look everybody around the table in the eye before you take a sip. Skål!

How you butter your bread.

Crispbreads usually have a bubbly side and a flat side. The flat side is for every day, the bubbly side is for Sundays. Some people disagree, so there are no hard rules, for once. Rye bread that has too much butter is called ‘tandsmør’ – literally, tooth butter. Meaning the indent of your teeth can be seen. 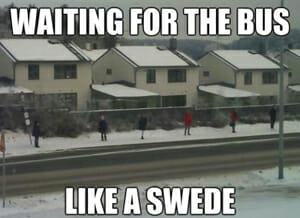 In most shops – especially in Sweden – there are little ticket machines. Brits may remember these from supermarket deli counters in the 80s before they disappeared. Take a number as you enter and wait your turn. You never ever cheat. We like orderly queues, but are not very good at them, so this helps us. At bus stops there are no ticket machines, so it is your job to remember at what point you turned up. This is stressful. You know the other people will remember, so don’t mess it up.

A general rule of thumb:

Danish: If you own anything not black, get rid of it. You’ll probably never need it again. Buy oversized scarves, dye your hair very blond and wear it in a messy bun if a girl – or bed-head style if you’re a guy. Viking Beard optional.

More info about looking like a Dane here from this blog.

Swedish: Very blond hair. If you’re a guy, we recommend the ‘Stockholm Stureplan Brats’ look. Maybe. Well, try it and see if it fits you. Otherwise, just grow a beard and speak with a funny accent. If you’re a girl, get yourself some skinny white jeans and white converse all stars.

Norway: Beard. Definitely eat brown cheese, have a backpack stuffed with Kvikklunsj and oranges. Buy a sheep. Bring it with you to places*.

*(Okay, the sheep comment was added by a disgruntled Swede who has since been punished and sent on a long vacation to Finland. Norwegians don’t really have pet sheep).

But no matter who you choose to style yourself on, don’t forget to get a Fjällräven backpack.

Now, go forth and be a bit more genuinely Scandi.

If you like reading random bits about Scandinavia, sign up for our (sometimes slightly amusing) newsletter on our homepage (down at the bottom to the left) www.scandikitchen.co.uk