Every language contains a few untranslatable words.  In Denmark and Norway, “hygge” is generally used as an example for a general state of lovely cosiness.  In Sweden, the word that is hard to translate literally is ‘Fika’.

‘To Fika’ is a good old Swedish word that basically means to ‘meet up, have a coffee and a chit-chat’.  We Scandinavians love nothing more than to meet up for a Fika. This can be done at any time – and a Fika can take anything from 10 minutes to several hours, depending on how good you are at Fika-ing.  If you’re in Norway or Denmark you don’t use the actual word Fika, but the rules of the game are the same.

For a good Fika you’d be expected to serve good Scandinavian coffee.  People in the Nordic countries drink more coffee than anyone in the world, even the Italians.  This is because we love our filter coffee – and it needs to be very strong and served in abundance.  When you have a Fikarast (coffee break) at work or meet someone for a Fika it is not unlikely to polish off a good 2-3 cups of filter coffee in one sitting.  Each.  Perhaps this abuse of caffeine goes a little way to explain why the Norwegians always sounds so happy and why we’re one of the biggest producers of Europop: Our veins are constantly beating in tune to Basshunter hits.

Once upon a time, back in the day, when men were men and women wore twin-sets and went to bed with rollers in their hair, people knew how to treat their guests when they popped by for a Fika.  No pre-packaged cakes, no just popping out to M&S for a roll of digestives and a ham & egg sub.  No, no, back when Granny ruled the roost, things were made from scratch, guests were treated to coffee in the finest china and nobody had to help with the washing up.

Back in the forties, a book was published in Sweden entitled ”Sju Sorters Kakor” – meaning, Seven Kinds of Biscuits.  It does contain recipes for well over a hundred biscuits and cakes, but the reason for the title was simple: seven was the number of different homemade cakes a good housewife should offer any guests that popped over for Fika.  Hmmm, yes.  Six kinds and you were stingy (and probably lazy), any more than seven and you were a show off.  Lagom. 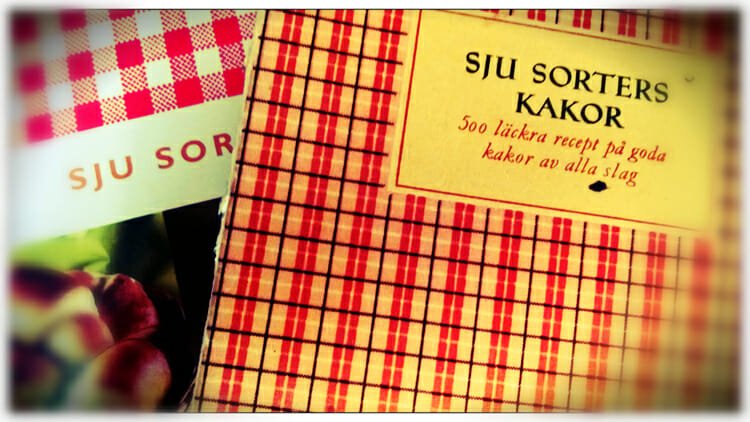 This lovely book quickly became part of Swedish culture and every household owns at least 4 copies and swear by the fact it is the most influential book since the Bible. Almost.  Every time a distant relative dies, you are guaranteed to receive a few more copies.  Despite the fact that it is illegal to throw any copies of this book away, it is still in print and new editions are churned out every couple of years.  There is a fear Sweden may sink into the ocean one day from a surplus of Sju Sorters Kakor books. Seeing as very few people still offer you seven kinds of biscuits when you pop over, one can conclude that someone somewhere is slacking in the baking department.

In Denmark, a similar fashion arose at around the same time.  In the south of Denmark, near the German border, a tradition known now a days as Sønderjysk Kaffebord, literally Coffee Table from Sønderborg, seeks to rival the Swedish housewife’s offering.  There, you are also expected to serve seven sorts of biscuits – as well as seven sorts of soft cakes – from carrot cake to chocolate cake and layer cakes.  Considering the generation of South Danish ladies who lunched at each others’ houses did not have to be carried around by pick-up trucks, one must conclude that restraint is in the back bone of those Danes.

While the average Scandinavian household no longer has a mini production line of home baking going on (the same as most British household no longer serve high tea on a daily basis), Scandinavians still do love their coffee breaks and we always take time to fika when we can – it is simply part of our culture and still today, it is generally accepted you can pop over to visit your friends without having to synchronise your Blackberry diaries 2 week in advance.  Whether you choose to take your fika breaks with seven kinds of cake, or simply pop out for a skinny soya decaf with vanilla syrup in the sun, make sure you spare a thought for the poor grannies that had to stay at home baking all day fretting about how to look better than the neighbour without over stepping the ‘lagom’ rules – and maybe have a go at making a few of your own (Ask any Swede and they’re bound to have a few spare copies of ‘Seven Kinds of Cakes’ recipe books lying around).