Yeah, we hear your hollow laughter: Why on earth do you need to know how to slice cheese? It’s just CHEESE, isn’t it?

To you, maybe. But to us Nordics, and Swedes especially, this is key behaviour territory. We will judge you. Oh, yes we will.

Cheese is of the upmost importance to all Scandinavians. Even if you do not eat cheese, you will be around people who consume a lot of it, so it is important to understand our love affair with what is, essentially, a bacterial process.

From the time of the Vikings, Scandinavians have been making cheese and consuming it on a grand scale. We eat 19–24 kg (42–53 lb) of cheese per person per year – in contrast to the UK, where people eat around 11.8 kg (26 lb). We are nations of tyrophiles.

In Norway, the most favoured cheese is called brunost, which means ‘brown cheese’, and it is indeed brown. It looks a bit like plasticine and feels like it, too. Made from goats’ milk that has been boiled, caramelising the milk sugars and thus turning it brown, it has a delicious, almost sweet, taste of caramel and goats: caramel goats’ cheese. It’s a particular taste that you either love or hate. Once you are stuck on it, you won’t be able to stop eating it and you’ll add it to your waffles, bread and snack on it at night straight from the fridge when nobody is looking.

The Danes favour more pungent cows’ milk cheeses, of slightly softer texture. Some of them smell like things that have gone off and have names such as Gamle Ole (‘Old Ole’), which is a fair description of the smell (the taste is far milder, as with most Danish cheeses). This particular cheese smells like something that has been left unwashed in the corner of a squat for a week or so.

Only the Norwegians have a stronger cheese – an old Viking-style cheese called Gamalost (‘really old cheese’), known to be so smelly it makes grown men cry.

Swedes like to think of themselves as the kings of cheese in Scandinavia, as they consume the most. Their cheeses range from the undisputed Västerbotten gourmet cheese to the more elaborately named Hushållsost (‘household cheese’). Only the Swedes would have a favourite cheese called ‘household cheese’: It’s very lagom.

Cheese in Scandinavia is often eaten with jam or marmelade on top. This is a perfectly reasonable accompaniment to all kinds of cheese. Simply add butter to bread or crispbread, a thick slice of your favourite cheese and a good dollop of jam on top and you have a great ‘mellanmål’ (afternoon snack).

In Scandinavia cheese is sold in very large packs, usually over 500 g–1 kg (1–2 lb) in size. This is because all cheese lives on a plate in the fridge once opened, covered with a plastic shower cap (it does the job in a very practical way, don’t knock it) and is taken out at most morning and midday meals plus at snack times. Most households only have one (max two) cheeses on the go at any one time, which can make a Scandi cheeseboard a bit boring at times.

Next to the cheese is a slicer. There are four kinds of slicers available, broadly speaking:

This is a metal cheese planer, as invented by a Norwegian many years ago. A metal planer works well on harder cheeses – from Västerbotten to your cheddars. No, Cheddar is not supposed to be hacked at with a knife, it’s supposed to be sliced. SLICED. Yes!

Use this for softer – but still hard – cheeses – such as Greve, Hushalssost, Havarti. Perfect slices every time. But use your plastic planer on a hard cheese and it will be thick, horrid slices. Know your cheeses. If we see this at your house: We know you’re one of us.

The Danish choice. Seeing as the Danish cheeses tend to be too soft for both a metal planer and the plastic one, cheeses such as Gamle Ole, Riberhus, Danbo etc favour a string slicer. Also, it looks cool on the table, as if you’re some kind of cheese god.

This is for the plastacine cheese; only serious cheese slicer people will have this. Perfect for slicing brown cheese. Not as common as the other kinds, but this is the one to aim for if you need perfect brown cheese slices. 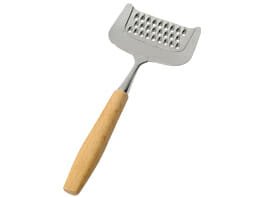 This is invented by the Dutch, but could have been invented by the Swedes: How only to grate enough for your sandwich and avoid ANY waste and you can STILL keep your cheese level. A cheese-grater-planer. Smart.

How to slice it

There are rules one must follow when slicing cheese in Scandinavia. Once you have chosen your appropriate equipment, make sure you slice from the correct side. The aim is not to create any sort of slope whatsoever on the cheese. These slopes, created by careless, non-trained, usually non-Scandinavian people are referred to as skidbacke (‘ski slopes’) and are considered a waste of cheese. The ultimate sin.

If you cut the cheese wrong at someone’s house, do not expect to be spared a snide comment even if you were introduced to your Swedish girlfriend’s Dad only fifteen minutes earlier. There will be no going back if you fail at this and you will forever be known as a sloper.

So, instead, look at the cheese and slice from the side that is currently tallest, ensuring you help to even out the cheese to perfection. Get yourself a large block of cheese and some slicers – and practice at home.

Ski-slope fixing is a national sport in Sweden and some people pride themselves on being the silent fixers. These people go through life, with slight OCD, quietly fixing other people’s mistakes, never being able to enjoy a decently sliced piece of cheese themselves. Ever. These poor people are forever eating the crappy, bitty correction sliced because you simply could not be bothered to learn the rules. Suffering for your sins. You don’t want that on your conscience, now do you?

We’ve written a book about how to live like a Scandinavian. Read it and be enlightened. It’s called North. You can get it on Amazon (also available on Amazon US and Canada).

This article is based a little bit on one in that book.